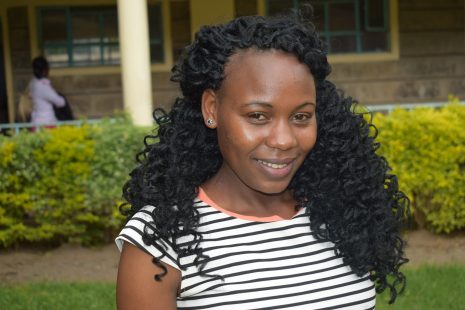 Rhodah Wanjiru is the academy manager of Bridge, Lamu having joined the academy in 2014, “because I wanted to be part of the change that Bridge was promising,” she explains. At 26-years-old, Rhodah is now an academy manager, meaning that she has a lot of responsibility in the running of her academy.

Rhodah is from Lamu herself, making the plight of the academy all the more personal to her. She is particularly passionate about the education of girls she says, and is pleased that Bridge is making it a priority. “Bridge has impacted the community by providing life-changing education,” Rhodah explains, “They’ve helped to improve literacy levels in my community, and our pupils are now shining bright!”

That isn’t to say the job hasn’t been challenging at times, Rhodah candidly admits, highlighting drug abuse within the community as a problem she’s working hard to combat. However, the job has been extremely rewarding, because she says: “Bridge has a desire to change the lives of our children, which has been their driving force.”

Rhodah is quick to point out that she couldn’t do any of it without the brilliant team of teachers behind her. “My relationship with my teachers is great,” she says, “We work together, we crack jokes and above all we respect each other.” The Board of Management, a parental committee, is also a crucial component in the running of her academy.

She is clearly intensely proud of the achievements of her pupils. Although she has a busy job as academy manager, she also finds the time to teach English because it’s her favourite subject, and says she feels “inspired” when she sees her pupils chatting in English. “What I love about my pupils is that they welcome change and are always willing to learn new things. Their thirst for education motivates me, and I’m optimistic that they’ll perform excellently in their KCPE this year,” she smiles.

Rhodah has been ensuring that learning doesn’t stop once kids leave the classroom. Valuing the importance of team sports, Rhodah hosted zonal football games at her academy, and managed to take the team up to compete at County level!

Rhodah believes that “education is the key” to a good life. She’s disappointed by the critics of Bridge who she feels don’t understand the work being done. “We need to educate them, and then they’ll join us!” she promises. With her own child just starting off in Bridge baby class, Rhodah is excited about what the future holds for her pupils. “They are all stars!” she says.