Bridge chosen to fly the Flag for Kenya

Bridge pupils are proud to have been chosen to represent Kenya in Taekwondo.

Excited pupils from Bridge Academy, Majengo Mapya in Mombasa are representing Kenya in the Junior Taekwondo Championships in Kigali, Rwanda. Competing against teams from elsewhere in Africa, the team hopes to make Kenya proud. 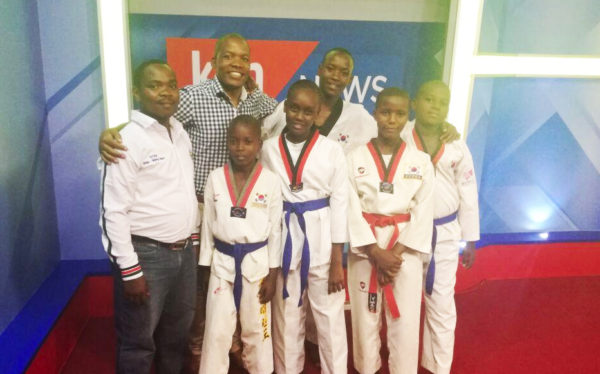 The Bridge pupils earnt their place in the international competition following their impressive performance the Kenyan Taekwondo tournament in Nairobi last year. They dazzled the judges; finishing second in the Korean Ambassador Cup Primary Schools National Championships, with an impressive haul of 18 medals.

The African Tournament in Rwanda has been organised by the South Korean Ambassador to Rwanda, His Excellency Kim Jong-Joong. As a sport, Taekwondo is a very physically demanding martial art – originating in Korea – and characterised by head-height kicks, jumping and spinning kicks. Competing teams will have to display athleticism and ingenuity to have any hope of success.

Taekwondo was officially recognized as a national sport in Rwanda in 2011. The newly elected President of the Rwanda Taekwondo Federation, Placide Bagabo, has pledged to ‘build solid relations with clubs, athletes, regional and international taekwondo bodies’. The Blue Sky tournament could be the first step.

The Bridge Taekwondo Team from Majengo Mapya has had a meteoric rise to the international stage, starting with the defeat of the defending Mombasa County Champions, Ganjoni Primary School, along with 16 other schools to become Taekwondo Champions of their County in 2017. This secured them a spot at a national tournament in Nairobi where they finished in an impressive second place, narrowly missing out on the top spot.

Their coach, Chrispine Mwadime said: “I am really proud of what our pupils have achieved. They have been working really hard and the results show that this hard work has paid off. To be successful at Taekwondo you need to be very dedicated and the support these pupils have been given has enabled them to improve, and win!”

Ten-year-old Bridge pupil Bahati Omar, who was awarded a hard-won Bronze medal in the Nairobi competition, said: “I am proud and grateful for having the opportunity to nurture his skill in Taekwondo and compete against the best in Kenya.”

The Bridge team in Rwanda was Captained by Class 7 pupil, 13-year-old Mwinyi Bakari, who said “ It was a real honour to represent my country! I never thought that I would have the opportunity but I am so proud of my schools and my teammates. I want to thank our coach and all of my teachers at Bridge Majengo Mapya for their support”.

Their track record of success began in 2015:

Success inside and outside of the classroom

Bridge believe that co-curricular activities are an essential feature of a child’s education, helping them to develop leadership, confidence and team working skills that go on to help them both inside and outside of the classroom.

Across all of our schools, we offer pupil the opportunity to participate in a range of co-curricular activities including sports, music and dancing.

Find out more about our co-curricular activities, below: