Growing up, I attended school but I was not learning. The cliff tops of Kilifi to the halls of Kenyatta University

Up to class six, Victor Mramba attended a school where he was not learning. The scare of finishing primary school without the basic skills needed to support himself and his family and lead a successful and productive life stared at him. Victor Mramba felt fortunate to have escaped his learning struggles and be given a second chance when his parents enrolled him in a high performing community primary school. Even then, his background meant that the odds that he would pursue his studies beyond primary school let alone up to the university level and study a degree in law were still against him.

The Start of the Journey
Victor Msafiri was born in September 2000 in Mnarani village, Kilifi County. He grew up as one of the five children, in an impoverished neighbourhood on the cliffs of Mnarani that overlook the plains of northern Kilifi. 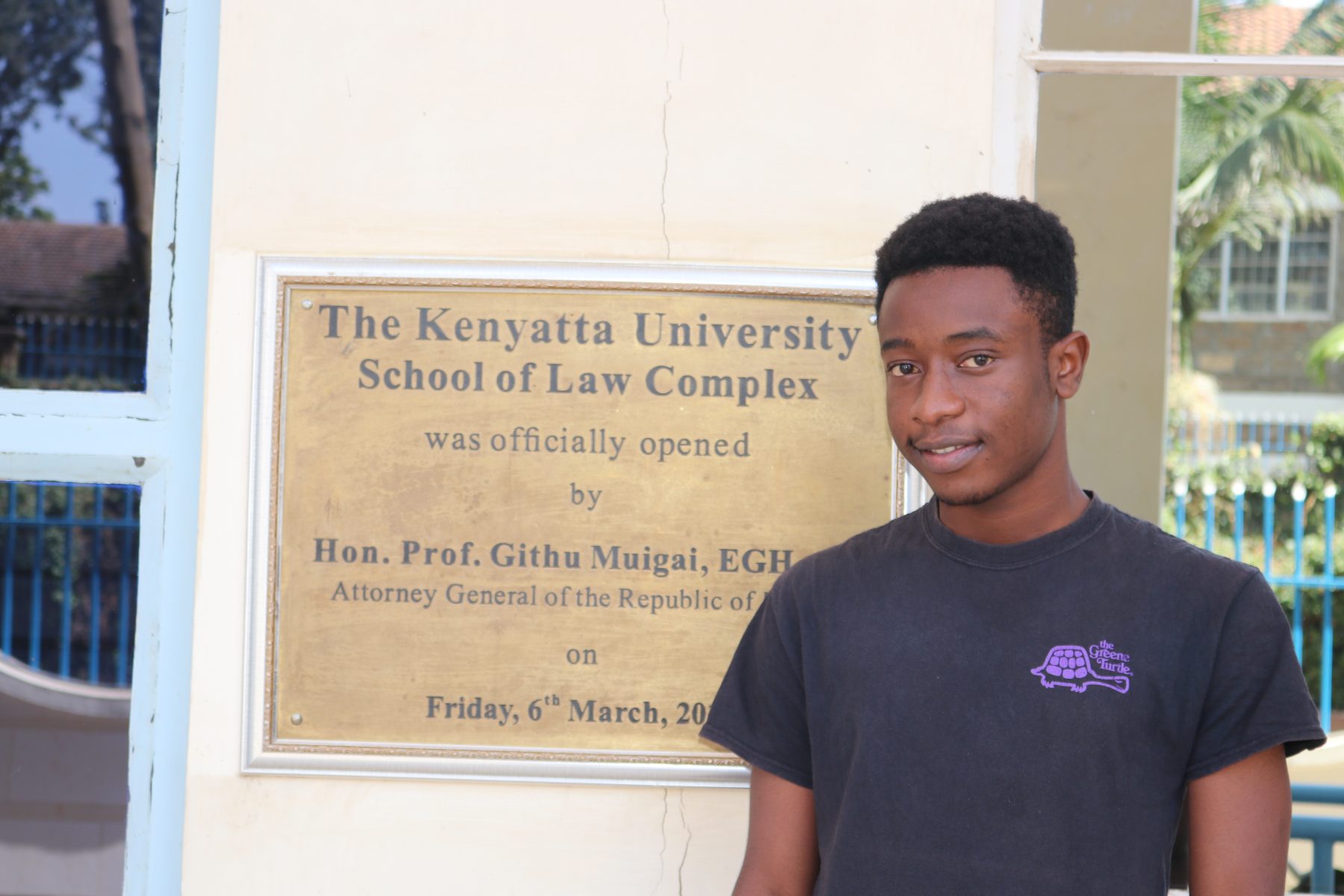 Growing up in a poverty-stricken community was heartbreaking. Families work hard day and night, through tiredness and sickness, with dreams ranging from a simple meal to eternal prosperity. Unfortunately, they have drowned in the pit of poverty and despite their efforts, they are unable to climb out. Many children have succumbed to the punishing poverty which manifests itself in early marriages, child labour and drug abuse.

When Victor attained school-going age, his dad who works as a local chef enrolled him in a nearby primary school. He still remembers his first day at school.

“I was excited about my first day. I had my new uniform: a green short, a white shirt and a new blue bag. When we arrived that day, my dad handed me over to the teacher and said goodbye. I stood with the other children. I didn’t talk to them because I was too nervous.”

Victor’s schooling journey had just started, in what would turn out to be a bittersweet experience.

He sat for his national Kenya Certificate of Primary Education (KCPE) exams in 2015, emerging among the top performers in the country with a score of 402 marks. The excellent performance did not come on a silver platter, it was the culmination of a long struggle; a struggle to learn.

For over seven years, Victor attended a school where he was not learning. Teachers did not show up in school, and when they did, they just gossiped around instead of teaching. Children were in the school, but playing or sitting at desks or on the floor if there was no space, passing the day. Struggling to learn anything or make any progress in school, Victor felt like teachers and the school system had ganged up against him and his friends, and he was about to give up. There were no points hoping for more; when he couldn’t count or read.

Luckily, his days of learning struggle would not last forever. After facing seemingly insurmountable odds for over seven years, he would finally get his big break. And this break would come after his dad enrolled him in a new school that was making buzz in the area for using technology to teach at affordable cost for the families in his community. For Victor, a gateway to success had just opened.

The school was Bridge Mnarani Academy in Kilifi County.

The move to Bridge was a defining moment that would turn the tides for Victor. Bridge unleashed the potential in him. His performance in class improved terrifically; he was able to do the things that had escaped him previously.

In contrast to his former school, at Bridge, Victor flourished. He was surrounded by teachers who worked with him one-on-one. Pupils had an individualized attention that prepared him for academic success. He felt that the lessons they were teaching were there to help him learn and that they cared if he understood. Victor felt cherished and valued by his teachers in a way he had never felt before.

Speaking of his time at Bridge, Victor had this to say.

“The environment and teachers at Bridge made me feel welcomed from day one. I loved how small the classes were compared to my past school and how I was able to really get to know all of my teachers and classmates. This made a huge impact on my education — not making me feel like I was just another body. My teachers were able to get to know me and help me throughout my time at Bridge. Before I joined Bridge, I didn’t believe I would pass my KCPE; the idea of getting 402 marks was something I did not think of. But it happened. I thank God that my dad heard the buzz about the new school and changed me. My future would have been very different.”

Making it to Secondary School despite the challenges
On a sunny morning of February 2016, Victor arrived at the gate of Kenyatta High School Mwatate in Wundanyi, Taita Taveta County. This was his first day of secondary school. He was accompanied by his dad and mum.

Victor remembers that day with nostalgia. His new blazer was a bit oversized and he had to fold the sleeves back. He was so excited yet so terrified at the thought of his first day in secondary school.

“As I went through the registration process, a lot was going on in my mind. Was I going to learn in my new school? Would teachers attend lessons and teach? I had struggled a lot with learning for the better part of my primary school, and thought of another learning struggle sent chills down my spine,” says Victor.

Victor settled well in his new school. He met students from all over the country. Kenyatta High School Mwatate is a boys’ national school that admits top performing pupils from all the 47 counties in Kenya.

“All the students who are admitted in the school are top performers, which makes learning very competitive. It is a game of equal among peers,” remarks Victor. “I had the skills that I needed because of Bridge. I was confident and disciplined. It didn’t matter that some boys had rich families. I was good in class.”

Victor enjoyed the learning environment in his new school. He enjoyed the academic competition and rivalry among students. They pushed him to the limit and made him a better learner. He says that the values instilled in him at Bridge were the stepping stones that kept him going.

“Bridge definitely prepared me for the life ahead by providing me with skills such as time management and learning how to be an independent learner.”

University is a reality not just a dream
As someone who once struggled with learning, with no motivation and poor grades, Victor hadn’t considered university an option. It was never a dream.

After passing his O-levels, with a mean score of A minus in the 2019 Kenya Certificate of Secondary Education (KCSE) exams, he was accepted to study law at Kenyatta University. 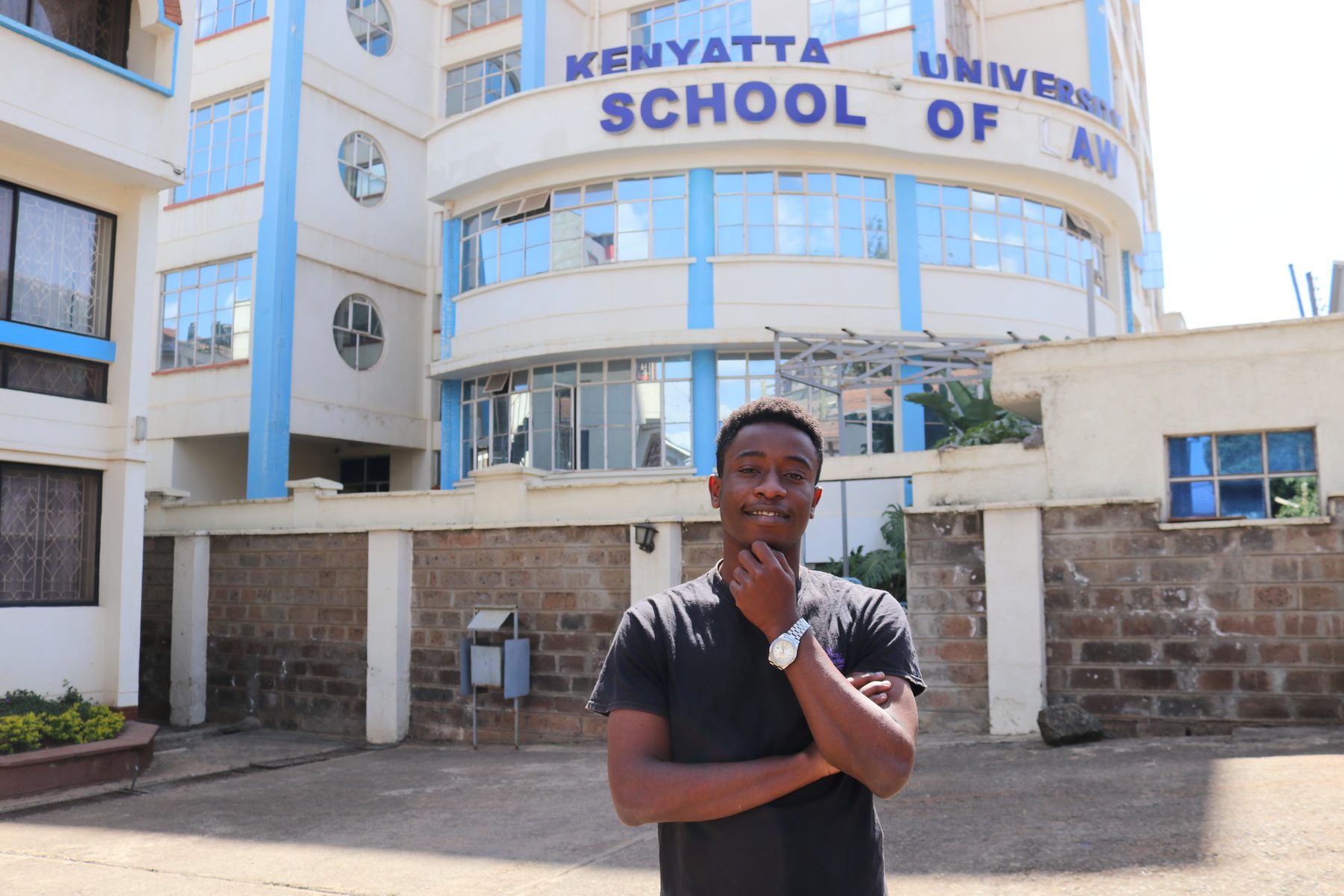 Victor was ecstatic when he got admission to law school. This was a dream that he’d once thought was well out of his reach. His past problems and circumstances had made him doubt that it could be done. His elder brother had completed O-levels but was unable to advance further due to school fees challenges.

“Higher education would likely not be a part of our family’s present situation, or future endeavors, had it not been for the influence of Bridge,” says Victor.

Victor wants to develop himself into an accomplished lawyer to fight for human rights, equal treatment and access to knowledge for all.

He is confident that he has the right attitude and the ambition to sustain the challenge and become successful in a career that would provide him with the prospect of achieving his dream.

“Law is a fascinating career. I know I have the enthusiasm, capacity for intense work and the open mind needed to succeed in such a fulfilling vocation. I am deeply committed to a profession in the legal system, as I pay much interest to issues that affect today’s society.”

Parting shot
Despite being enrolled in school, many primary school-age children don’t seem to be learning very much. They learn so little while they are in school that they will not be much better off than those who never attend school. 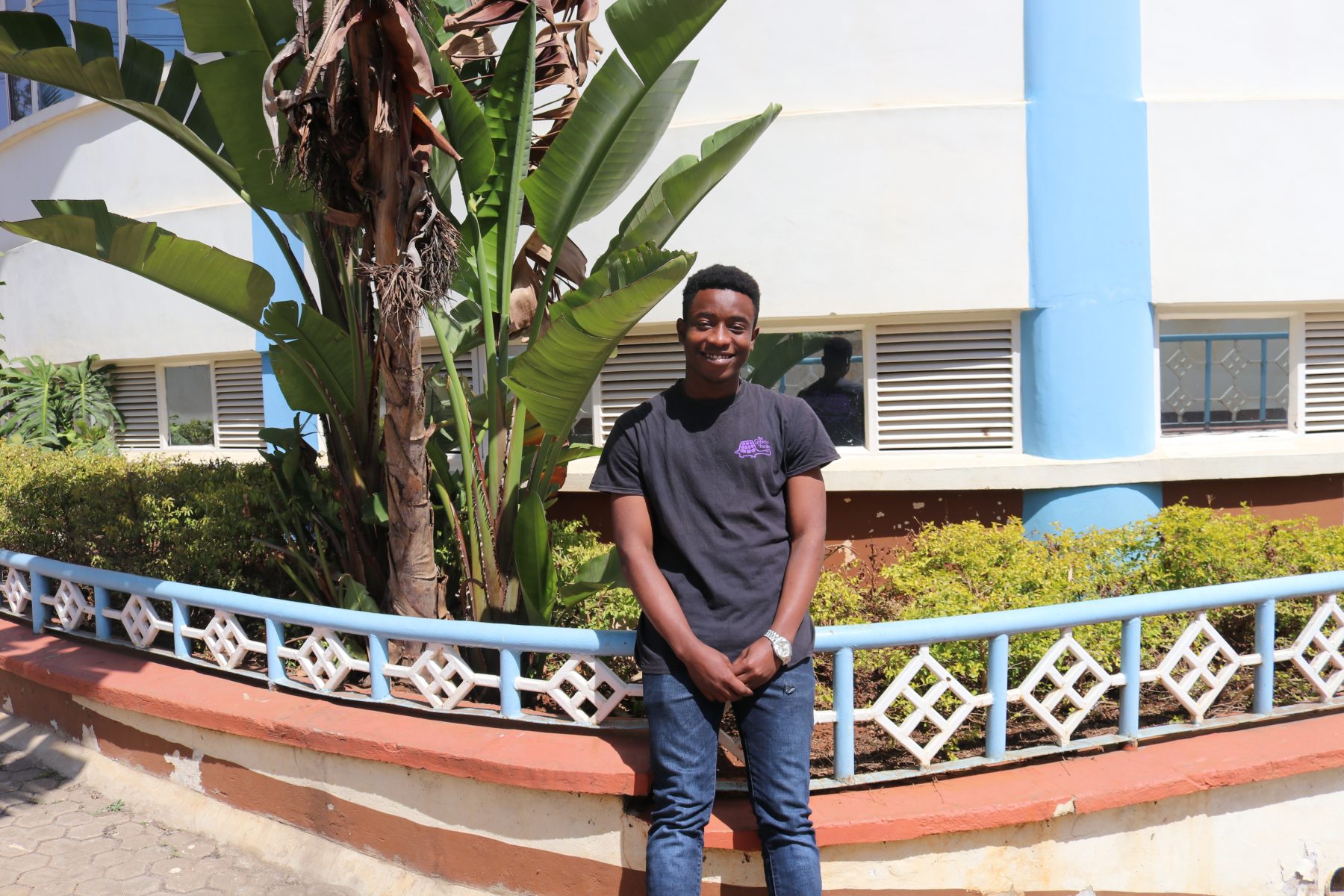 Victor was lucky enough to have been enrolled in a Bridge school where he had teachers who ensured that he was learning and empowered him to succeed. It wasn’t too late for him. His life changed for the better.

What about the millions of children in Kenya who are attending school but not learning? Who will come to their rescue? Who will open their gateway to success?

Victor is a shining example that shows every child has the ability to learn well and succeed but they need the right environment; good opportunities and teachers that are trained to teach well and that really care whether their pupils learn.

There is no reason why there should still be schools where children are not learning to read and count. We know that it can be better. We know the techniques and technology to use. Stakeholders in the education sector should be determined to make it better, to raise standards and improve learning outcomes, where children’s potential for academic achievement is maximized and nurtured with great teachers and effective instruction.

Nelson Mandela said that education is the most powerful weapon which you can use to change the world. This will only be true when we eliminate the problem of low-quality education which is a barrier for schooling and learning.

From an impoverished community and a large family in Kilifi to the halls of Kenyatta University in Nairobi; we should fight for every child in Kenya to take Victor’s journey and share in his success. That is how we will open the gateway to success for all children and build our nation.