Jeremiah Onyapindi: The support of a school family helped to overcome grief and study engineering at JKUAT

Grief after a deeply-felt loss can turn your entire world upside down. For the typical person, dealing with a loss can be one of the most difficult things to get through. But for a high school student, it gets even more complicated when the demise of a parent exposes the family to deep financial distress. Jeremiah Onyapindi loses his father soon after joining secondary school, a trauma that throws his life – and his chance of educational future – into disarray. His former primary school was a great source of support in his early life enabling him to excel academically; with his education in trouble, it supported him once again and sponsored him to complete secondary school, keeping the gateway to success open for him. Today, Jeremiah is an engineering student at Jomo Kenyatta University of Agriculture & Technology (JKUAT).

Jeremiah was born into a large family of more than 10 children, in the border town of Malaba in Bungoma County. He was born in a village where life was very hard and making ends meet was constantly a struggle. 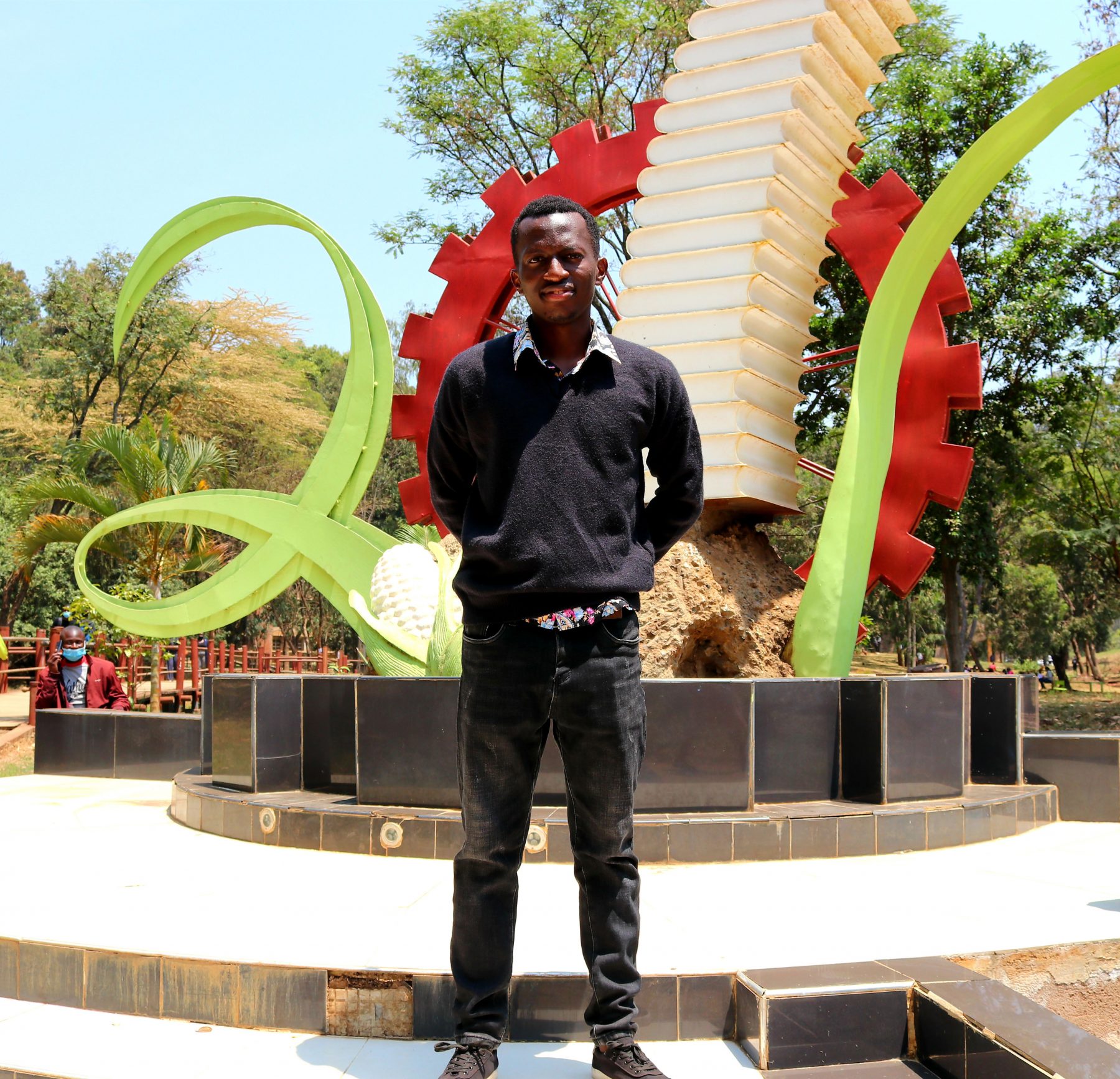 Children growing up there faced many challenges; including accessing quality education. Many children in large families like his, did not go to school and if they did, they learnt very little in the overcrowded classrooms with no resources. Luckily for him, his parents heard about a school called Bridge in the neighbourhood that was providing high-quality education at affordable cost for families like his. According to Jeremiah, the school had good teachers and used technology to help pupils learn. The school was focused on keeping children engaged; says Jeremiah. Everyone had to participate in the lessons; and everyone was noticed. The teacher cared about him and his friends. There was no place to hide and be silent. It grew his learning quickly and gave him confidence.

Jeremiah did his KCPE exams in 2015, scoring an impressive 377 marks. This mark opened the gateway for future success. In early 2016, 15-year-old Jeremiah started his secondary school journey after being selected to join Butere Boys High school in Kakamega County. He was elated.

However, as fate would have it, his happiness would not last for long. Soon after joining form one, the worst happened; Jeremiah lost his father. His world stopped.

“When my father died, my life changed forever. I felt alone, scared, angry, and cheated out of a lifetime of memories with the most important person in my life. Burying my father at a time I needed him most hit me in a way that I never expected,”

The death of Jeremiah’s father who was the family’s bread winner exposed his family to deep financial woes. His mother, who was a stay-at-home mum could not sustain the family’s needs from the meagre proceeds she got from subsistence farming. His secondary school education hung in the balance.

His alma mater, Bridge, heard about Jeremiah’s predicament. Secondary school fees were challenging for many of the pupils at Bridge; even when they have excelled at the primary level their educational future can hang in the balance. To try and help, Bridge runs a sponsorship programme for its academically gifted graduates to help them attend secondary school if they need it. Jeremiah’s family tragedy and his previous performance at school meant that he was a strong candidate for the programme and the school network found him sponsorship that covered the cost of his secondary school education.

“When my dad died, I had no idea what to do. Bridge came to my rescue at a time when the fate of my education hung in a balance. My father, who was the breadwinner, passed on when I had just joined form one. Bridge told me about the sponsorship programme for graduates and helped me to complete my secondary school education,” he says.

This gave him the peace of mind and an opportunity to focus on his studies, without having to worry about when and where the next term’s tuition and upkeep fee would come from. 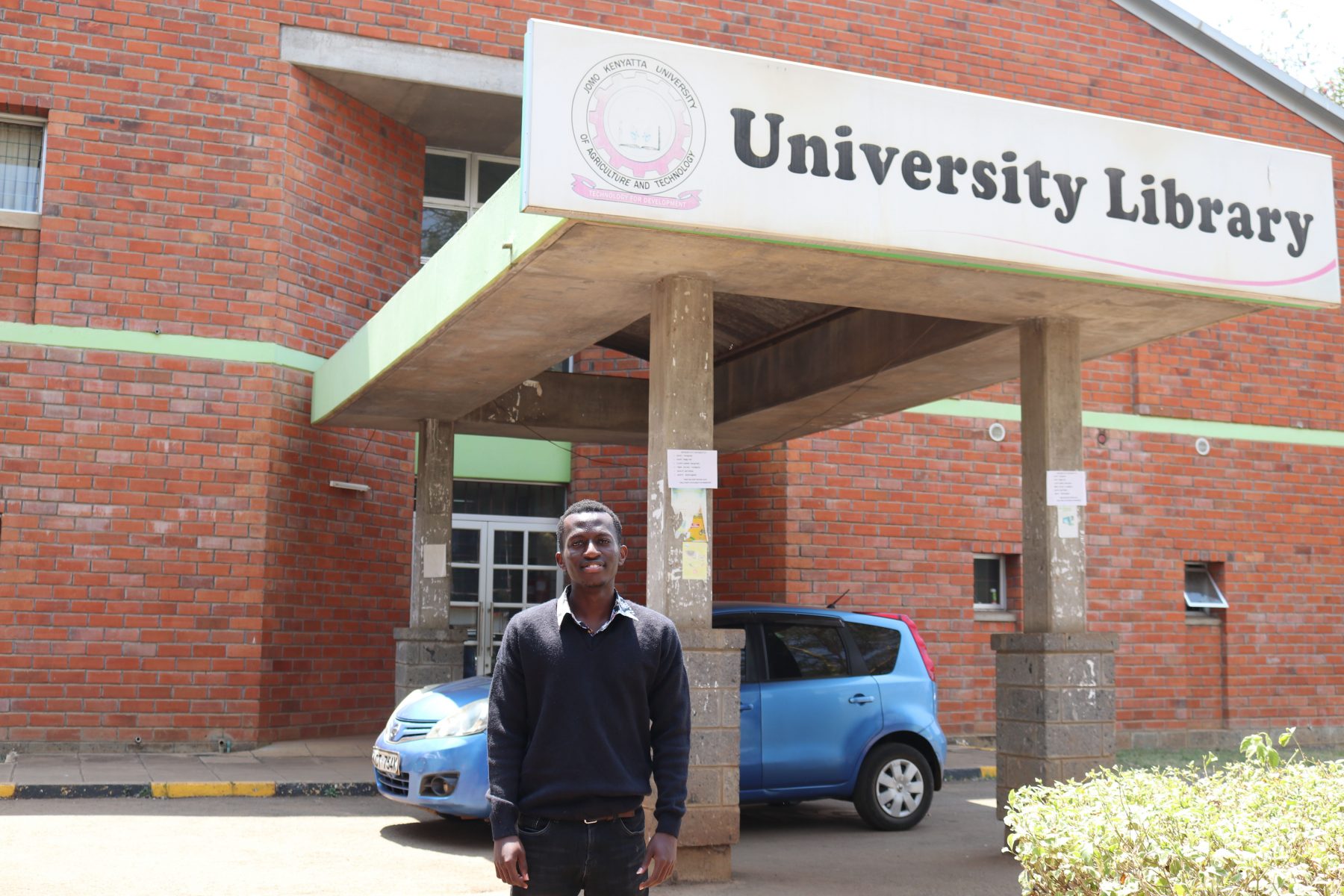 “Bridge supported me, they made sure I never lacked anything that would compromise my studies. I never missed any class or school as my fee was paid in time. They also followed up on my progress in secondary school and encouraged me to work hard and be smart. They empowered me to succeed.” Says Jeremiah.

Life in secondary school was not rosy for Jeremiah. Reeling from the loss of his father, he struggled for some time with concentration in the classroom. Despite the difficulty in concentration and feeling of great loss, Jeremiah was determined to succeed. He put in intensive effort and studied hard, never giving up, and overcame obstacles to achieve his dream of going to university. He graduated from high school as one of the top students in the 2019 KCSE exams with a mean grade of A- making everybody involved in his course proud.

Looking back at his journey, Jeremiah had this to say.

“I wouldn’t be at University and couldn’t have achieved this without Bridge. Had I not enrolled in their primary school; i wouldn’t have achieved my strong KCPE results. Had I not been part of the Bridge family, I would have not been able to turn to them for ongoing support when tragedy struck. I am forever grateful and honoured. By awarding me sponsorship, they gave me the focus and encouragement to keep pushing towards my goals and helping me to be a better person and achieve more for my family and the community.”

In August 2020, Jeremiah joined Jomo Kenyatta University of Agriculture and Technology (JKUAT) to study a degree in Mechatronics Engineering. It was a dream come true for him, and one that mattered most to him because of his father’s connections. 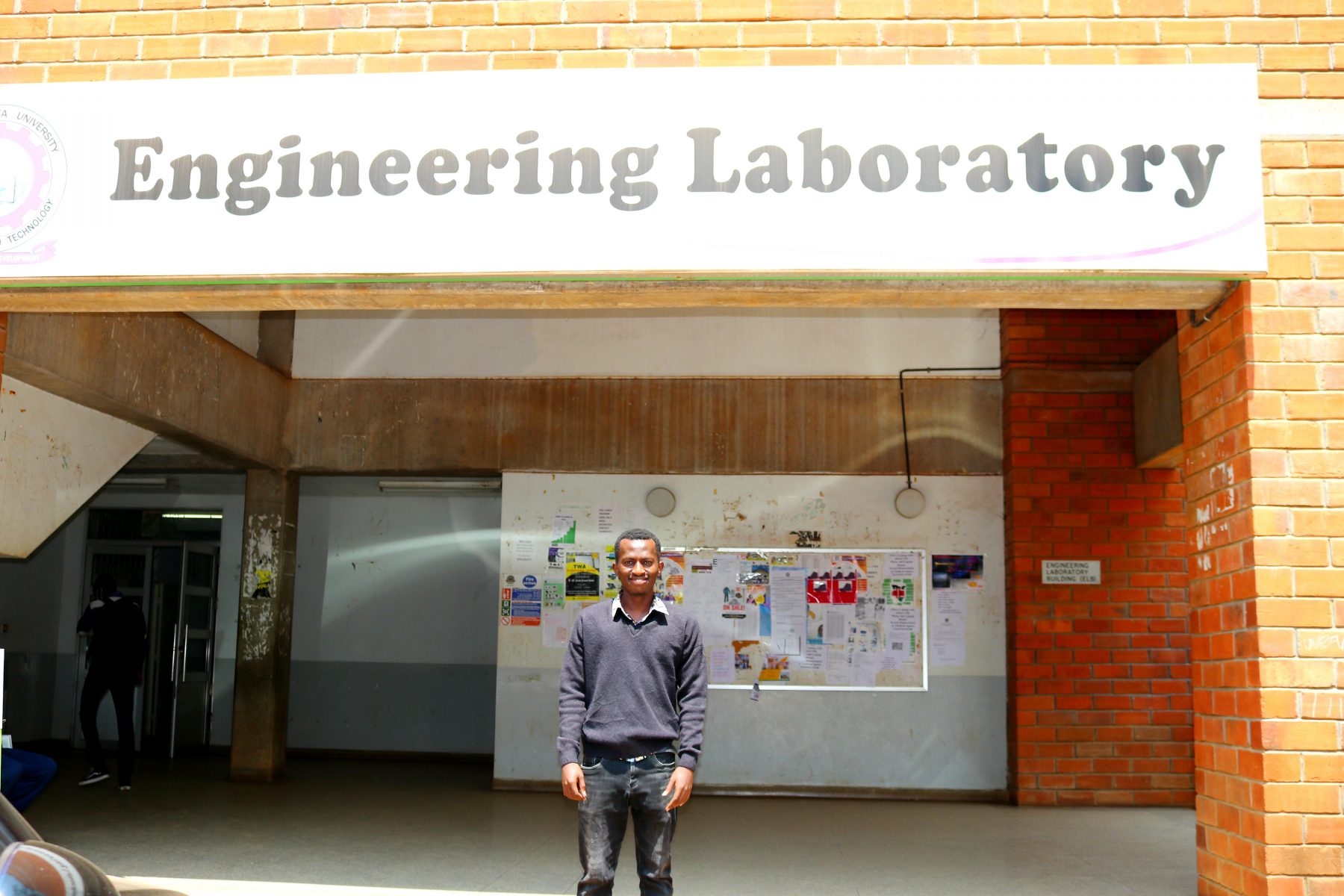 He says that his interest in the field of engineering dates back to his early years in primary school. As a child he was always fascinated by the very concept of automobiles. Besides, his father’s involvement in the automotive industry as a mechanic further enhanced his interests in engineering. He was the one responsible for sparking the quest for an engineering career in him.

“I would love to keep my father’s memory alive by seeing to it that I complete my education and become an engineer just like he was. His death will be a constant reminder and motivation to keep aiming for the sky,” says Jeremiah.

Attending university has been an exciting transition to the rest of Jeremiah’s life. He has enjoyed the opportunity to interact with people with similar interests and the opportunity to meet professors and students who could fill him with knowledge of engineering.

He is eager to follow his lifelong dream of becoming an engineer, to increase his knowledge in the field of engineering, and to surround himself with people who have similar interests. 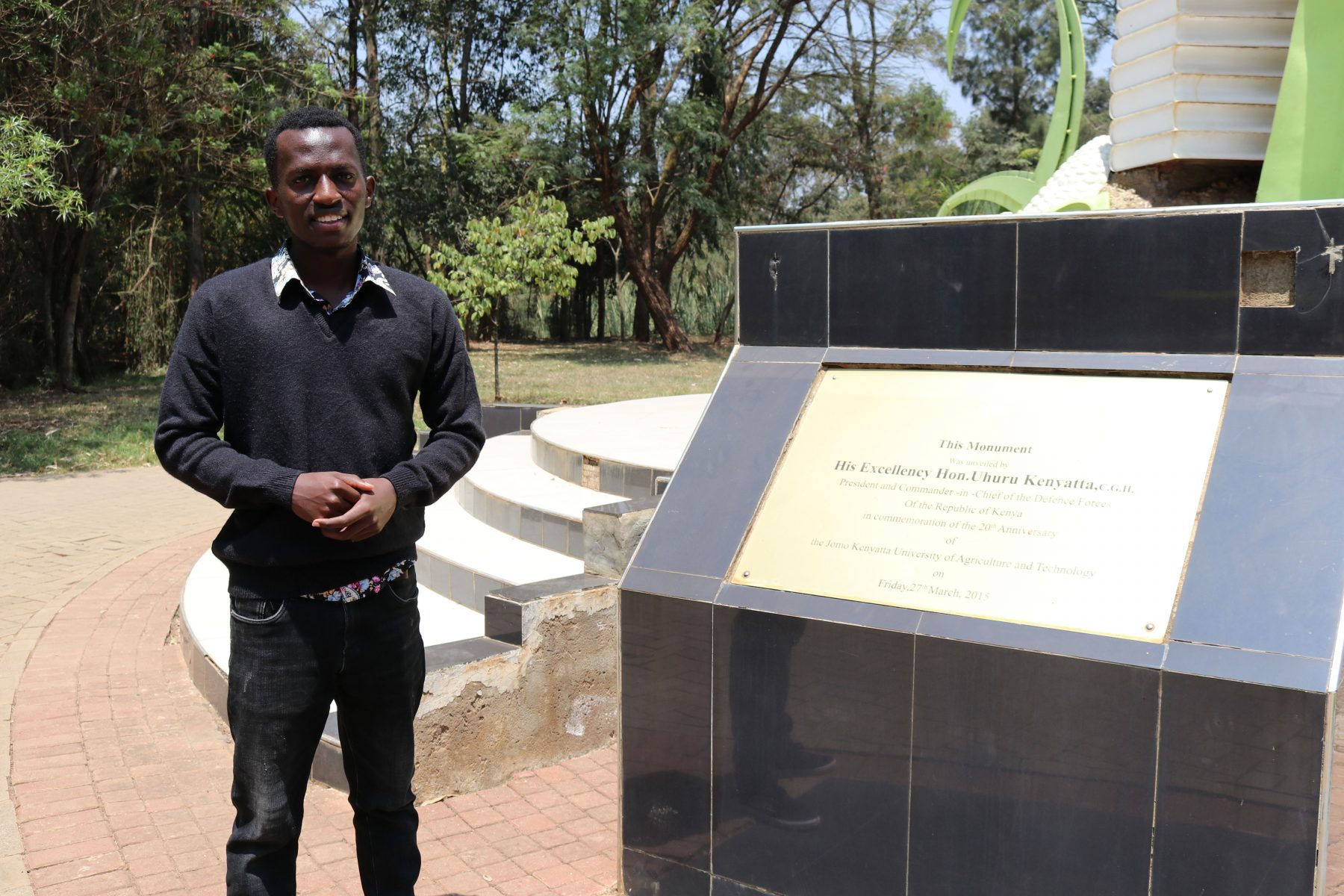 As somebody who has experienced painful loss in his life, Jeremiah says that education is the only thing in life that can never be taken away from him. With every class that he is taking, he is moving closer to being the person that he wants to be; a licensed professional engineer. He is bullish he can achieve the academic requirements to do so.

Jeremiah’s journey all starts in finding a primary school that would really help him learn while caring and nurturing him. His school family helped him to succeed; not only while in primary school but gave him somewhere to turn when life got difficult. There are millions of children across Kenya, who could succeed; who could attend university. All they need is a strong foundation; a strong school and great teachers.