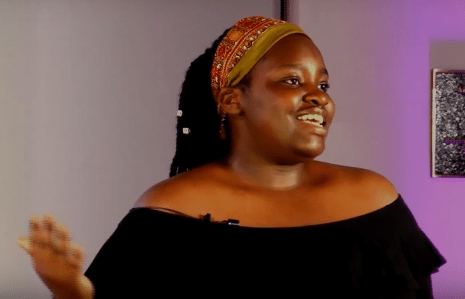 Above: Grace speaking in her TedX talk

Grace is a Bridge graduate who prides herself on her home country of Kenya as well as her new life in the United States! Born and raised in Kenya, she was very much used to always staying near home. Before moving to the U.S.A. on scholarship, she’d never travelled away from home for more than a couple of hours, and had only ever lived in two places; Kisii and Nairobi.

Up until fourth grade, Grace’s education was largely disrupted. She attended five different schools, never staying in one place for too long. In her first school, her teacher became increasingly frustrated, labelling Grace as a ‘slow learner’. Due to this, her mother pulled her out of school and moved her elsewhere. In her second school, Grace was bullied for her appearance by her fellow pupils, again forcing her mother to search for another school.

In eighth grade, Grace was placed at Bridge Mwembe Kisii. Straight away she could tell the difference between this school and the previous ones that she’d attended. The school offered her many learning opportunities, including the prospect of a scholarship to complete her secondary school education in the U.S.A.

Grace was shocked when she received a phone call from her mother telling her that she had received an offer for a scholarship to the United States. “Arriving at my boarding school in the U.S. was a big moment for me. I couldn’t help but notice all of the different faces in one place, as well as the relaxed dress code and different food,” she says.

Getting used to new technologies was a big step for Grace, as well as the new interactions from pupils. “In Kenya, it’s rare for anyone to say ‘hi’ to people they don’t know, unlike in the U.S.! It made me feel like everyone was one big family”.

Grace has stated that going home for the summer holidays made her realise that she was living in two different worlds. In one, she was striving to make her future brighter by being more independent. In the other, she had her biological family who care deeply about her. She gleefully states, “this made me realise that I will always have somebody there for me.”

Grace acknowledges that she was given an opportunity that not everyone in Kenya can get. She concludes: “Embrace who you are, take risks and love all of your homes wherever they are!”

Watch her TedX talk from May 2018 online here: I live in two worlds but both are my home.