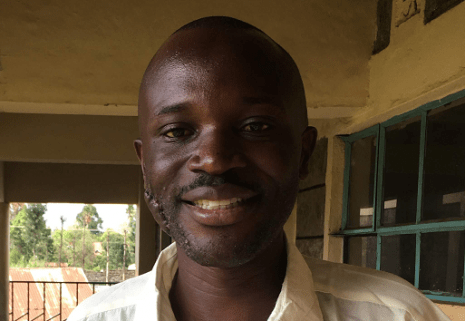 Meet Stephen Wambaya Kibeu, a teacher that has learnt so much from his training sessions.

Like with many of the teachers, Stephen found out about Bridge through one of his friends, a Bridge teacher in western Kenya. He was particularly attracted to extrinsic factors associated with Bridge, including the ability to make an impact in the lives of his pupils and colleagues. Stephen was also intrigued by the use of the teacher guide, as lesson plans were already loaded onto the guide. Stephen acknowledges that this gives him more time to focus on his pupils.

Due to this, Stephen decided to apply to be a teacher with Bridge. Having been accepted, he was soon at a teacher training session. He travelled far to attend the training, leaving behind his family. He said that he, “travelled for more than 300 kilometres, and it took many hours. I left my wife and children at home. It was very difficult to do that, but we all know it was for the best.”

Right from the off, Stephen learnt a lot about Bridge. He realised just how accountable Bridge teachers are so that teachers can get the best results out of pupils. Having already been intrigued by the teacher guide before training, Stephen was even more amazed when he saw it up close! He believes it will be very helpful to support his learning and how to use technology, an important skill in the modern era.

Along with all teacher trainers, Stephen was required to take mid-term assessments to test how much they had learnt so far. He performed above average amongst his cohort. The areas he did well in included scanning the room for any pupils that may be struggling and ‘Narrating the positive’, a technique of positive reinforcement.

As the teacher training sessions drew to a close, this gave Stephen an opportunity to look ahead to the future, and how he can make a difference in the lives of his pupils.

“I want to make my class a very conducive environment. I am creative, so I will add to that. I will make sure that pupils understand all of the content, work on revision if I need to. They are all going to succeed.”