Understanding why parents make the education choices that they do is important not only for school providers but for governments, policy makers and investors. There are a whole host of reasons why parents could choose a school for their child including quality, location, perceived prestige, values, teaching style; knowing which of those motivate a parent can help to design schools that better serve the needs of a community.

Every year Bridge surveys parents across Kenya who have chosen Bridge schools to understand why they have made that choice and how Bridge can improve. For the second consecutive year, the results show that it’s largely the quality of the education that is driving parental choice. The findings support a recent Oxford Review of Education paper which found parents in Kenya broadly believe that low-cost affordable schools offer a better quality of education, when compared to public schools.

Parents in the communities Bridge serves, struggle on a daily basis to make ends meet. They know that education is the best possibility they have to transform the opportunities open to their children and therefore they are focused on choosing schools which they believe will drive social mobility. They want to know that when they wave their children off to school, they will leave the classroom at the end of the day, knowing more than when they entered. As such, parents are proud of the choice they have made and increasingly so at Bridge. 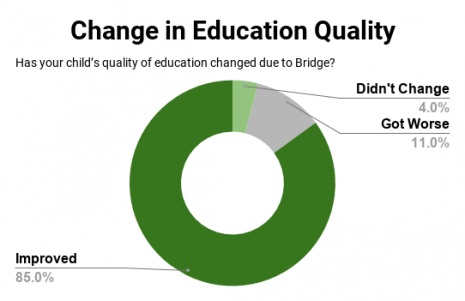 The survey findings follow the news of the fourth consecutive year that Bridge Kenya pupils have outperformed the nationwide average in their primary school leaving exam, the KCPE. So, for parents making a choice based on quality of education, their choice is substantiated by examination results.

Other key findings from the annual survey, include:

A Bridge parent whose child attends Bridge, Mwakingali in south-east Kenya, said: “I’ve seen a great difference in my daughter’s education, as compared to when she was at a neighbouring school. She’s improved in her studies and is destined to do well in her KCPE — just like her older brother did!”

Encouragingly, the teachers inside Bridge classroom are highly praised in this new feedback from parents. More than nine in every ten parents said they were happy with their child’s teacher. This is further evidence that the professionalism and hard work of teachers at Bridge is clearly seen by local parents.

It’s not only academic improvement being identified by parents but also noticeable changes in a child’s confidence and discipline after they joined a Bridge school. These positive developments in a child’s character are closely related to Bridge’s commitment to nurturing skills in children that help them succeed in life. 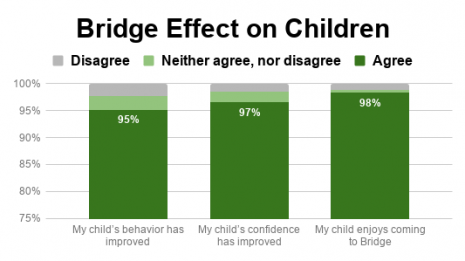 The question of whether a school is stronger because of parental and community engagement or whether a strong school drives parental and community engagement is hotly debated. At Bridge, the survey revealed that 88% of parents reported that they had ‘actively taken part’ in school life. In communities where parents are working long hours and often travelling big distances to do so, this level of parental commitment is extremely encouraging.

The annual survey gives an opportunity to really understand the choices that parents are making and adapt and iterate where necessary. While this particular survey focuses on Kenya, the learnings may well be applicable the world over – parents want a quality education for their children; no matter what their economic background and are making school choices that deliver upon that.

The strong trend of accelerated learning in Kenya

The widely anticipated 2018 Kenya Certificate of Primary Education (KCPE) results have been released. Over a million children took the [...]

Bridge graduates are celebrating in Uganda after surpassing their peers in the end of primary school exam. The strong results [...]